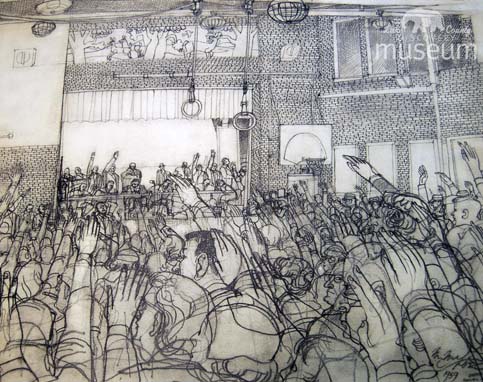 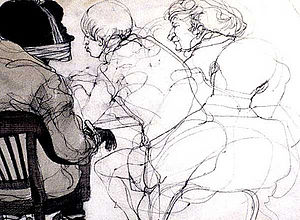 The work of American reportage illustrator Franklin McMahon (1921–2012) is an excellent example of how drawing can be used to document courtroom dramas. The following drawings are taken from his 1955 visual documentation of the trial of two men accused of murdering a black Chicago teenager Emmett Till who was visiting relatives near Money, Mississippi.
Look at the drawings and reflect on how McMahon has approached the task of documenting a courtroom drama. How does his approach to drawing tie in with the notion of journalism and truth? What do you think he’s managed to capture in these drawings and how has he done it? Write a short statement summarising your reflections. You may want to annotate some of the drawings, highlighting particular areas of interest.

(William) Franklin McMahon (September 9, 1921 – March 3, 2012) was an artist-reporter whose work took him around the world for more than half a century. His seminal work at the birth of the civil rights movement, his coverage of U.S. presidential campaigns between 1960 and 2008, America’s role in the space race, the formation of the European council,Vatican II, and scores of other political, cultural, religious and sporting events; all were part of a Franklin McMahon “day at the office” for the last 55+ years…except that for him, his office was his studio, which is the world. In the words of Peter Lyle of The Sunday Telegraph of London:

“…his pencil and his pad have been witness to many of the most significant events in postwar American and world history.”

His artistic output also included films and books. His widespread recognition, as evidenced by his exhibitions, his awards, and the broad array of national and international institutionswho hold his work, demonstrates that Lyle’s title “The Man Who Drew History” is well-earned.

Other than in his very early years when he did illustrations “on spec”, he was not an “after-the-fact” illustrator. In his own words, drawing from life made him an “artist-reporter” or a “reportorial artist.” “That way,” he said, “you can see around the corner.”

After the war, he married high school sweetheart Irene Leahy[9] and used the GI Bill to attend night classes at Chicago Academy of Fine Arts, American Academy of Art, Harrington College of Design, and the Art Institute of Chicago. They settled in Lake Forest, IL to raise their family, which eventually became nine children, several whom are now recognized artists.[10] He thought that artists belonged out in the world. Studio work was confining, so he sought jobs which allowed him to travel. Eventually, Irene became a travel writer, and accompanied her husband on many of his journeys. Wherever his travels took him, home base was always the Chicago area. Over the years he owned downtown condos and three different homes in Lake Forest. For the last several years of his life, he lived at Sedgebrook, a retirement community in Lincolnshire IL just a few miles from Lake Forest.

Artistic output and areas of activity[edit]

McMahon’s overwhelming main artistic output was his 8,000-9,000 drawings. He also produced films and books. His films incorporate drawings (see Technique section), at a rate of 200–300 drawings per ½ hour of film. The books, although sometimes labelled as “illustrated” by Franklin McMahon, had the same kind of [“on site”] drawings as those from the courtroom, the political arena, and all his other spheres of activity. Even his commercial work had drawings mainly done on site, not after-the-fact illustrations for existing text.

Civil Rights and the Space Race[edit]

McMahon’s work in both of these aspects of mid-20th Century American history helps illustrate his role as an artist-reporter. He began reporting from the courtroom in 1955, after some of his very early work came to the attention of Life magazine’s editors. Because cameras were not allowed at the Mississippi trial of the suspected killers of Chicago teenager Emmett Till, Life commissioned him to go there to sketch courtroom events. His drawings, and in particular, one of Till’s great-uncle, Moses Wright, standing to point at the accused men, were seen nationwide. From then on, on-site reporting with his drawings was a major part of his life work.

The Emmett Till trial in September 1955 was the early catalyst for the Civil Rights movement. McMahon’s on-site and on-deadline images from Mississippi, published nationwide in Life magazine, provided the visualization that helped spur Rosa Parks‘ refusal to give up her seat on the bus in December, 1955,[12] which then led to theMontgomery Bus Boycott and to the involvement of a young and relatively unknown black minister named Martin Luther King, Jr., along with one of the other boycott leaders,Ralph Abernathy. McMahon was at Martin Luther King’s, Jr.’s “I have a dream” speech during the 1963 March on Washington, on the National Mall. He also covered the two 1964 mistrials of the murderer of civil rights leader Medgar Evers. In March 1965, King’s march for black enfranchisement was going from Selma to the Alabama Capital Montgomery. About that time, Franklin was returning from NASA’s Cape Kennedy (in Florida) after covering one of the U. S.’s manned space launches.[13] He heard of the march on his car radio, and took a detour, arriving in time to document King’s arrival in Montgomery. He also covered King in Chicago in 1966, the United Farm Workers protest in 1968, and the 1968 Chicago riots following King’s death.

Bobby Seale at the Conspiracy Trial after the 1968 Democratic Convention, Chicago.
Painting by Franklin McMahon

In 1969-70, Franklin was courtroom artist at the infamous “conspiracy” trial of the eight (later just seven) defendants, resulting from protests during the 1968 Democratic Convention in Chicago. The 8th defendant, Bobby Seale, was eventually bound, shackled, and gagged, then separated from the group and sentenced for contempt of court by the judge. The trial lasted 5 months, with McMahon producing almost 500 courtroom drawings. They were published across the nation, including an entire issue of the Chicago Tribune’s Sunday magazine section. The Chicago History Museum currently owns both the collection of 483 drawings from that trial as well as that from the 1955 Emmett Till trial.[14] Civil rights was a continuing interest and vocation: he covered the presidential campaigns of black candidates Shirley Chisholm, U.S. House (’72) and the Reverend Jesse Jackson (’84, ’88), and was at the 1995 Million Man March.

During the Space Race of the ’60s and ’70s, Franklin was to return frequently to NASA’s mission control, including his coverage of Neil Armstrong’s walk on the moon. All would earn him a mention in NASA’s book Eyewitness to Space.

He drew Democratic presidential candidate Governor Adlai Stevenson II (’52, ’56) at his Libertyville, IL home. One of McMahon’s drawings of Stevenson hangs in that home, which is now a state historical site and listed on the National Register of Historic Places. He covered every Democratic and Republican campaign from 1960 through 2008, including attending a vast majority of the conventions, He made first-person drawings of the 1960 Kennedy-Nixon Debates (the first broadcast on live television) and later of Kennedy’s funeral. During Richard Nixon‘s successful 1968 presidential run, Franklin also drew the “unelected White House guys” (H.R. Haldeman, John Ehrlichman and John N. Mitchell), that he correctly predicted would surround Nixon. His take on Nixon’s 1974 resignation showed the disgraced ex-president escaping in a helicopter. There are McMahon drawings from the 1973 Watergate hearings, of Senator John McCain’s “straight talk express” in New Hampshire in 2000, the stirring Barack Obama speech at the 2004 Democratic Convention, and on the 2004 presidential campaign trail with George W. Bush and Senator John Kerry. 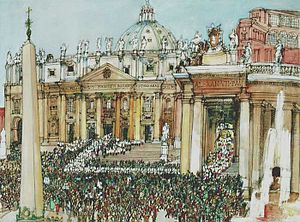 He was in Rome on October 11, 1962 for Opening Day of the Second Vatican Council, and went on to chronicle that major event through 1965. His film The World of Vatican II covers the opening and closing of Vatican II; and is a literal “travelogue in drawings” of many countries where Catholicism was facing new challenges at that time; and how and by whom they were being met. He followed Papal journeys, Council activations, and ministries in the Church world through the 1970s and 1980s. In the 1990s, he was in Chicago and South Africa with the Parliament of the World’s Religions. Drawings he made in South Africa were published by Notre DameMagazine and accompanied an article by Archbishop Desmond Tutu in U.S. Catholic Magazine.

McMahon accompanied conductor Sir George Solti and the Chicago Symphony Orchestra on their first European tour in 1974. The whimsical title (Real Violins) of his film describing that trip refers to Chicago’s reputation as a city where gangsters once carried machine guns in violin cases. He worked for Sports Illustrated Magazine on assignments ranging from the 1959 American League champion baseball team Chicago White Sox and Goose Hunting in Cairo, IL to the Acapulco Yacht Race in Mexico.

McMahon also created artwork for corporations and businesses. A series of decorative plates which he designed with Chicago themes for Continental Illinois National Bank(1972–1982) were given out as premiums at that time. They have since become collectors items, and are still traded on eBay.[15] He did other work for Continental, and also had commercial commissions for McDonald’s Corporation, International Harvester, Marshall Field & Company and Borg-Warner, among others. He had been heard to say that his work for Continental put several of his children through college.
With sketch pads in hand, Mr. McMahon covered momentous events in the civil rights struggle, spacecraft launchings, national political conventions and the Vatican, turning out line drawings for major magazines and newspapers. Many were later colored by watercolor or acrylic paints, and most rendered scenes in a heightened, energetic style. His goal, he said, was to step beyond what he considered the limitations of photography to “see around corners.”Photographers capture a moment, he said, but he could combine moments, often hours apart, into a single picture and thereby convey, he believed, a larger truth. He might, for example, pluck images from a political convention — a balloon drop, a speaker, a network camera — that never appeared together, and put them in the same frame.

Please bear with me

Only material for completed assignments are complete. Other pages, portfolios and posts are indicative only.